What better way to start the school holidays than a family fishing trip? Excitement filled the air and bounced off the walls as we prepared to embark on our journey. Everyone jumped out of bed the moment the alarms went off. I did not even need to knock down my son’s door. With a carload of gear, we took off toward the York Peninsula. After a few stops along the way, we arrived at our destination four-and-a-half hours later. The holiday rental—with its spacious living areas and ample amenities—exceeded our expectations. After settling in, we treated ourselves to a pub meal on the first night. The second day was when the fishing started, for the guys at least. I lounged on the beach with my Kindle, drying off after a brief dip in the icy cold waters. Aside from a walk through the local flora reserve and a couple of visits to the tennis courts, we spent the remainder of our vacation hanging out in the house. Drinking, cooking, and gaming. We had a good time overall. Did the guys catch a single fish? Hell no! But that’s never the point of a fishing trip. 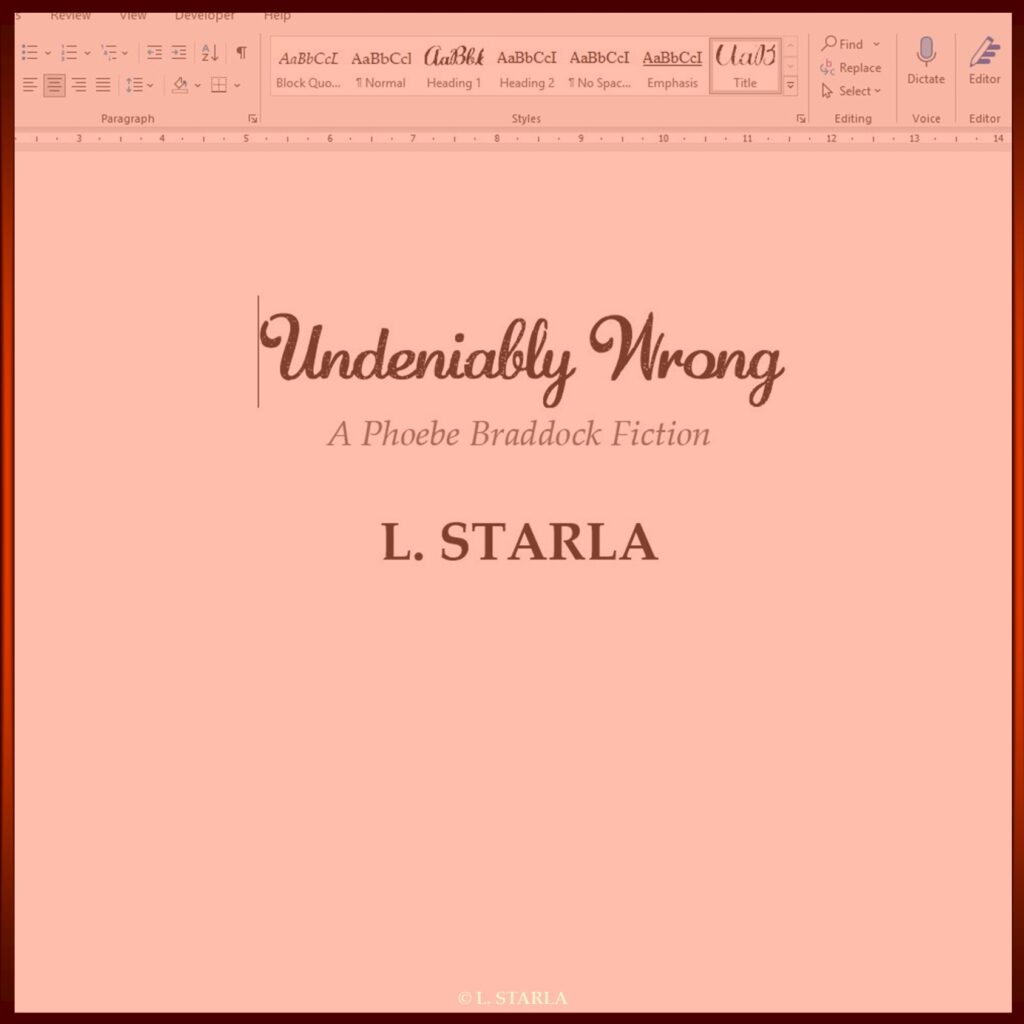 As far as my writing work goes, I am now several chapters deep into my WIP. Undeniably Wrong is the fourth instalment of the Phoebe Braddock Books. I plan to publish this one in August 2022. It tells Lucinda’s side of the story. A tale of heartbreak and adultery. A tale of high society schemes and veiled threats.

Here is an excerpt from the opening scene…

Innocence is such a fleeting phase, yet even now society prizes a woman’s virtue as a treasured commodity. Lucinda once valued the ideals of saving herself for marriage, but in the blink of an eye, she let a stranger pluck the precious pearl from her oyster. She never even knew his name. Looking back on the deed, she questioned her reasons and came up with a plethora of excuses: the guy’s sex appeal, peer pressure, alcohol, hormones, growing tired of behaving. They all seemed valid, but one truth shone brighter than the rest: she wanted him. Undeniably. It all started with a stupid game…

Lucinda groaned, exchanging a look with Nicole who offered a sympathetic simper, but neither of them vocalised their protests. Denying Erin was top on the social suicide list, right next to double denim and listening to Aqua. The other four girls giggled, passing a French Champagne between them. How do they not see the irony of drinking their “classy” beverage straight from the bottle? Shivering, Lucinda wrapped herself in the sleeping bag on her bunk.

Wicked intent gleamed like sapphires in Erin’s blue eyes. ‘Just for that show of enthusiasm, I think Lucy should go first. Does anyone have a question for her?’

‘I do!’ Sally waved her hand in the air and Lucinda narrowed her eyes on the daft girl. ‘Last I heard, you were a virgin. Is that still true?’

A sigh slipped out as Lucinda’s shoulders deflated. ‘Yeah, still true. I told you I’m saving myself.’

Zoe Bristow giggled. ‘That’s like so archaic. No one really waits for marriage anymore, do they? I mean, who’s gonna check?’

‘But God knows all,’ Erin mocked, impersonating their religious studies teacher, Sister Josephine, with hands held in a sign of prayer. Everyone except Lucinda and Nicole sniggered. The Queen Bee returned her attention to Lucinda. ‘I dare you to get off with someone tomorrow. Find a hot single guy on the slopes and flirt with him, then in the evening, make your move.’

‘For Christ’s sake, girl, I’m not insisting you have sex with the guy, unless you want to.’ Erin’s lips curled in a lopsided grin. ‘You just need to get as far as second base, bonus points if you do so in his bed.’

‘I’m still not sure.’ Lucinda bit her lip, debating the pros and cons of defying Erin.

‘Refuse the dare, and I’ll let the records show you slept with Terrance Bristow.’

Bile climbed Lucinda’s throat at the thought of such a horrid rumour spreading. Zany Zoe’s brother was one of the vilest men to walk the Earth and he would happily support Erin’s claims, especially given their history. She shuddered as the memories pushed their way out of the locked recesses of her mind. Gulping down the bitter taste, Lucinda nodded. ‘Okay. It’s only second base right?’

If you would like to beta read this story early next year, please apply to join my Beta Team.